So I'm learning about 802.1x authentication as a means of securing access to the LAN of a client who wants to be PCI compliant (and one part of PCI compliance is securing publicly accessible network jacks).

The environment consists of:
That said, these screenshots and notes will all come out of my home lab.  Here's a link to my syntax source.

Installed NPS on a test server and told it that my test switch would be a RADIUS client.  Created a wildcard "Connection Request Policy" to accept the MAC address of a test Windows PC: Told the switch what RADIUS server to use:

The switch offers both chap-radius and eap-radius...these are simply frameworks for transporting authentication to the server...for chap-radius to work, the user/computer password in Active Directory needs to be stored with reversible encryption (not the default), so eap-radius seems preferable.

Next, I started the "Wired Autoconfig" service on the test Windows PC (you can do this via group policy in a production environment)...this service offers credentials to the switch for authentication by RADIUS...I learned (and you can see this in a Wireshark packet capture!) that when a computer boots up it'll try to authenticate with its computer account...and then after a user logs in, it re-authenticates with the logged-in user account.  So cool, huh? 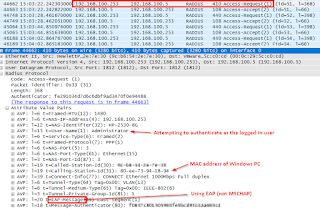 So far, no certificate was needed on the NPS server.  However the Windows PC complained on its NIC that "Authentication Failed" (but it was still given the "authorized" VLAN due to the Connection Request Policy that I'd created).

So, how to fix this message?  Created a Network Policy with an authentication method of PEAP: 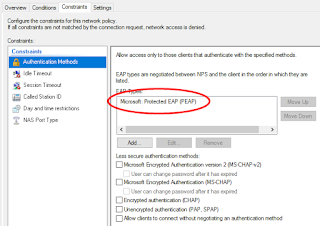 Now the NIC was happy:

...and bear in mind that this is without any client-side certificates.  I like that.  Keeps it simple.

Next: get my VoIP phone working.  However, when I plugged it into the switch, the switch never said a thing to the RADIUS server, instead it just dropped the phone into my unauthenticated VLAN (3).

The solution is to enable MAC authentication in the switch as a fall-back mechanism for when devices don't do 802.1x authentication.  (Syntax source).

The first step of this was to disable something I'd done earlier:

...then replace it with this:

This is because if 802.1x authentication fails on switch ports 3 or 4, then MAC address authentication will be tried...and if that fails, then the device will be dumped into VLAN 3 (my DMZ). 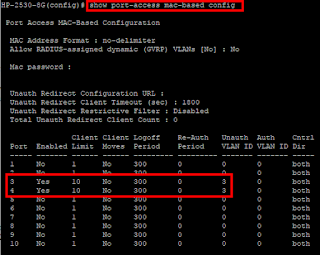 A VoIP phone was on port 4...disconnected / reconnected the phone's patch cable....it got a new IP from VLAN 3 and rebooted.

This was good.  Now, how do I authorize it in NPS?

I'm using a wildcard MAC address here, and I got the format of the MAC address from a Wireshark packet capture: 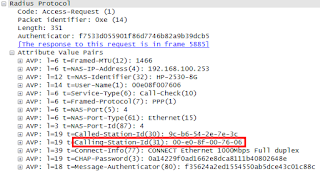